Private Excursion to island of Tinos 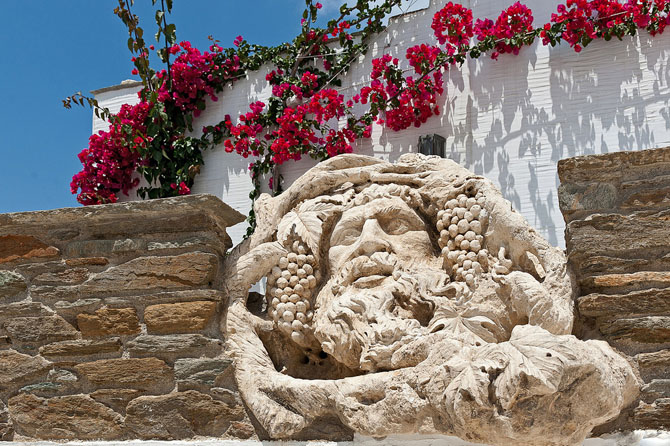 Discover a Tinos Island you never knew existed-one resplendent with lush greenery set against rugged mountain ranges and next to the sparkling Aegean Sea.

Enchanting yet still unknown to the majority of tourists, this Cycladic island mostly attracts Greek pilgrims travelling there ,to visit the church of Panagia Megalochari (the Blessed Virgin Mary).But a pilgrimage is not the only reason for getting to know the amazing island of Tinos, with the 40 traditional villages, or, according to the philosopher Kastoriadis, the “hand-made Tínos”.

After you have been collected from your pick-up location and after a 35 min boat trip we arrive to the island of Tinos where we are going to visit in the following order :

Kardiani village is a picturesque village and certainly the greenest one in Tinos. It is situated at the mountainside “Pateles” and has a spectacular view over the sea and a breathtaking sunset. Built in the shade of tall plane and olive trees, the village has stone paved narrow alleys, whitewashed steps, wonderful arches and beautiful traditional two-storey houses surrounded by lush flower gardens.
Tinos Dovecotes
During your journeys around Tinos, and particularly near the villages of Komi, Krokos, Kardiani and Tarabados Valley, you’ll come across the famous Tinos Dovecotes, of which there are around 600 dotted about the countryside. These unusual creations date back to the 18th and 19th centuries, and were used during the island’s Venetian era for the breeding of pigeons.
Tinos’ dovecotes are unique in all of Greece as they are built from stone and are ornately decorated with geometric patterns of triangles and rhomboids interspersed with depictions of cypress trees. It was believed these unusual designs served to attract pigeons to use the dovecotes as roosting places. The Tinos dovecotes were declared artworks by the Greek Ministry of Culture in 1984 and 61 of them are now listed as Monuments.
Pyrgos is probably the most famous village , in Tinos. The walk through the alleys of the village gives the feeling that you walk around a Marble museum, since the carved marble decorates richly fountains, churches, but also the lintels of the houses, the cobbled streets and even the bus stop. Even today the marble art is booming, with several sculptors having their workshops here and the school of Marble Crafts of Tinos incubating young artists. The largest village of Tinos has a nice surprise: a large plane tree in the middle of the main square, next to the marble fountain, with ornament shops surrounding it.
Kolympithra beach
Also known as Mikri Ammos & Megali Ammos, you can detect it at the most northern part of Tinos, around 25min away from Chora. Basically it is separated in two; on the one hand there is the largest part which is hit by the northern wind and is quite peaceful and on the other hand, there is the smaller but protected from the winds bay with the semolina sand and jade green waters which is first in preference. Τhere are deck-chairs, umbrellas, taverns and beach bars.
Tinos Town
Tinos’ main town (or ‘Chora’) is named after the island itself, following the traditional naming convention you’ll find on many Greek islands, including Mykonos! A wander around Tinos Town will yield all manner of architectural delights, thanks to the interesting interweaving mix of Venetian, Cycladic and modern architecture, and there are numerous shops selling all manner of souvenirs and products.
Holy Church of Panagia Evaggelistria (Our Lady of Tinos)
This church in Tinos town is the island’s most famous attraction, and one of the most important pilgrimage destinations in Greece. Tradition holds that Sister Pelagia, a nun from the nearby Kechrovouni Monastery on the island, had a vision of the Virgin Mary that guided her to a spot where a holy icon of the Virgin Mary kneeling in prayer was subsequently unearthed. This icon is believed to possess divine healing powers. The magnificent Renaissance style Church of Our Lady of Tinos was built on the site of the discovery, with the icon as its centrepiece. Construction on the church was completed in 1880. Today the church forms a focal point of pilgrimages for the Greek Orthodox religion, with devout pilgrims making the journey from Tinos port to the church on their knees as a sign of their faith. Inside the church is packed with offerings laid by pilgrims for the Virgin Mary seeking the healing powers of the church.

This is a private tour/activity. Only your group will participate.  Μaximum participation 4 people.

Pay via PayPal; you can pay with your credit card if you don’t have a PayPal account.

Do not hesitage to give us a call. We are an expert team and we are happy to talk to you.

We are a new team full of enthusiasm. Each of us has had a long time working with incoming tourism on the island of Mykonos.Our mission is to make your stay in Mykonos a memorable experience, full of amazing discoveries and memories.